At 87, Noam Chomsky, the founder of modern linguistics, remains a vital presence in American intellectual life. An emeritus professor at the Massachusetts Institute of Technology, where he still teaches, he has a dual identity, reflected in his several dozen books. Many are on theoretical linguistics and the philosophy of mind. Others are sharp, leftish polemics on American politics. Dr. Chomsky is back in the news, thanks to a pair of high-profile attacks. In “The Kingdom of Speech,” Tom Wolfe pairs Dr. Chomsky (“Noam Charisma”) with Darwin as the malign Ur-theorists of evolution. In “Decoding Chomsky: Science and Revolutionary Politics,” the British anthropologist Chris Knight explores “the Chomsky problem” — the paradox of a thinker who belongs to the “professional and scientific elite” even as he espouses populist political ideas.

It will soon be 60 years since your first book, “Syntactic Structures,” was published. Where was the study of linguistics then and what did you see that could be done?

The belief at the time was that languages can vary arbitrarily, so when you study a new language you should come to it without any preconceptions. Such views are still held, although the evidence to undermine them, I think, is simply overwhelming. Studies have shown that the diversity and complexity is superficial, while the internal system, which yields the fundamental properties of language as a system of thought, may be close to uniform among humans — basically following very simple genetically determined properties and general laws, like principles of computation. Some of the most exciting work in the field is going in that direction.

I think that’s clearer and clearer. The emergence of language as a system of creative thought was sensed by Descartes and Galileo. But it was not really addressed till the mid-20th century because the tools weren’t available to formulate it properly. You needed the modern theory of computability, which was developed by Alan Turing and other great mathematicians of the 1930s and ’40s. I was lucky that I was becoming an undergraduate at just the time that all these great insights were emerging.

Have you read Tom Wolfe’s book?

It’s so uninformed and distorted that it hardly rises to the level of meeting a laugh test. In the Harper’s Magazine excerpt, there’s exactly one paragraph that is accurate, quoted from an interview we had in which I explain why his crucial example, the Amazonian language Pirahã, is completely irrelevant to his conclusions and claims because what he says about Pirahã — correct or not — is about the language itself, not about the common human faculty of language. To take an analogy: If some tribe were found in which everyone wears a black patch over one eye, it would have no bearing on the study of binocular vision in the human visual system.

How about Chris Knight? He connects your theory of language to Pentagon-funded work you did at M.I.T. during the Cold War.

The Pentagon was the means by which the government carried out industrial policy and developed the high-tech economy of the future. M.I.T. was almost entirely funded by the military, including the music department. Does this mean we were doing military work? There was a study in 1969, the Pounds commission — I was a member of it — to investigate whether any military or classified work was being done on campus. Answer? None.

Why do you think we’re seeing this resurgence of analysis? You must tire of defending your work.

I’ve been defending the legitimacy of this work, extensively and in print, for 60 years. In earlier years, the discussions were with serious philosophers, linguists, cognitive scientists. I’m sorry to see that the resurgence you mention does not begin to approximate that level — one reason why, unlike earlier years, I don’t bother to respond unless asked.

Let’s talk about your politics.

I supported Bernie Sanders. The most important issue we face, a real question of species survival, is climate change. I’ve been criticized for advocating a politics of fear, which is correct. That’s not a criticism. That’s sanity.

What do you make of the political climate today? Of the student protests?

Humans face critical problems that have never arisen before in their history, problems of survival of organized human life on earth. They are barely mentioned in the current electoral extravaganza and the voluminous commentary about it. Fortunately, young people are often deeply concerned and directly engaged.

You’ll be teaching two classes next semester at the University of Arizona.

Yes. An undergraduate course will focus on the current stage of globalized state capitalism and ways of approaching “the common good” as it has been conceived in various ways since the Enlightenment. The graduate seminar will explore critical topics at the boundaries of current inquiry into the nature of language, its acquisition and use, its evolution. Every class is a challenge and often leads to rethinking and exploration of new directions.

How do you account for your amazing stamina and energy level at age 87?

The bicycle theory. As long as you keep riding, you don’t fall. 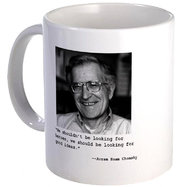 Bono of U2 called you the Elvis of academia. Students wait hours to hear your lectures. Then there’s all that Chomsky memorabilia — mugs, T-shirts, even luggage tags.

Seems strange to me. It can only mean that my activist engagements and professional work somehow relate to what many people are looking for and don’t appear to find elsewhere.

Do you own a Chomsky coffee mug?

No. But I get things from friends. The one I like is one my grandchildren like. It’s a little figure of a gnome you can put in a garden. “Gnome Chomsky.”

One thought on “Noam Chomsky and the Bicycle Theory”

Visit Also: The World The People and the truth

Member of the Greek blogs by women!